In the 1930s, two first basemen named "Buck" made the big time in black baseball: Buck Leonard and Buck O'Neil. For years Leonard was a fixture with the Homestead Grays and O'Neil with the Kansas City Monarchs.

Although Buck Leonard was the best first baseman of the 1930s and 40s, Buck O'Neil was a star in his own right. A much bigger man physically than Leonard, O'Neil was not a home run hitter, but a slick-fielding line-drive hitter along the lines of Mark Grace.

O'Neil was born in Florida and grew up watching his father work in the celery farms. O'Neil vowed to make a better life for himself and he attended Edward Waters College in Jacksonville, where he starred on the baseball team. After attending college for a few years, O'Neil started his professional baseball career with the Miami Giants, a team owned by a man named Buck O'Neal, and he picked up the nickname "Buck," and it stuck!

In 1935. O'Neil was the first baseman for the Denver White Elephants, along with fading superstar Oliver Marcelle, and the team entered the first National Semipro Tournament in Wichita. It was in Wichita that O'Neil caught his first glimpse of top Negro League players when the Bismarck integrated team stormed through the tournament with Satchel Paige, Double Duty, Quincy Trouppe, Hilton Smith, Barney Morris and Chet Brewer to win the $5,000 first prize. The White Elephants team barely made enough money to have a good time in Wichita before going home.

In 1936, O'Neil played with the Dunseith, North Dakota Acme Colored Giants, and he batted over .300. The Acme Giants boasted future Negro League stars Johnny Markum and Joe Scott. After playing a few months in North Dakota and Minnesota, the Dunseith Giants changed their name to the Shreveport Acme Giants and barnstormed south. In August, O'Neil again joined the Denver White Elephants for the National Semipro Tournament in Wichita. Unfortunately, the White Elephants had to play the Bismarck club in their first game, and their top pitcher, Pistol Pete Albright, was knocked around while Bismarck's Hilton Smith breezed through nine innings in a 14-0 Bismarck win.

In 1937, Double Duty Radcliffe, the manager of the Memphis Red Sox, signed the 25-year-old Buck to play first base, but when he tried to juggle O'Neil and Goose Tatum at the same position, he ended up trading O'Neil to the Kansas City Monarchs where he would stay for almost 20 years as a player and manager.

O'Neil was a great contact hitter and usually batted in the #2 slot in the batting order because of his ability to hit-and-run and push the ball to the right side of the infield to move up runners. He also spent plenty of time in the 4th, 5th and 6th spots because of his ability to drive in runs. When he was young, O'Neil could run, and in 1938 he came in second in the Negro American League in stolen bases.

In '42, O'Neil helped the Monarchs win the Negro American League pennant, and he batted .353 in the World Series that fall as the Monarchs swept the Homestead Grays. O'Neil showcased his diverse skills during the series with two booming triples as well as a well-placed bunt single.

Like many other players of his era, O'Neil missed several seasons due to service during World War II. O'Neil served in the Navy from '43-'45 and missed playing with Jackie Robinson with the Monarchs in '45.

Like Mark Grace, O'Neil hit the ball hard to the opposite field, and in 1946 O'Neil copped the Negro American League batting title with a .353 mark. In the Negro League World Series that same year O'Neil batted .333 with two big homers (including a 7th inning blast in game 7) in a losing effort against the Newark Eagles, and was robbed of a triple late in the seventh game by Leon Day (the great pitcher was playing center field) that could have meant the Championship for Kansas City.

That winter, O'Neil played with Almendares in the Cuban Winter League, and they swept Havana three straight games to end the season and win the pennant.

O'Neil recalled years later, “Whew, they turned it out. Everybody was excited. They had people riding all over the streets in cars, hanging onto streetcars, blowing horns, with ribbons and banners and everything. Oh, Havana was outstanding, really.” 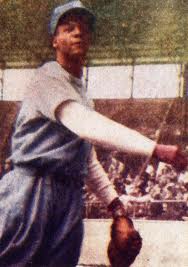 In 1948, Frank Duncan retired as manager of the Monarchs, and O'Neil was named his replacement. He would manage the Monarchs through 1955. Besides being an All-Star player, O'Neil may have been the best Negro League manager of the 1940s and 50s. He sent more players to the Majors than any other manager, including Elston Howard, Ernie Banks and Gene Baker.

O'Neil played in four East-West All-Star games failing to hit safely in 11 at bats, but garnering a sacrifice and RBI. He also managed the West squad in '49 and '50 and '53, and was named manager in '51 but was replaced due to illness. In his three East-West games as manager, O'Neil's team won twice.

In 1956, O'Neil was hired as a scout with the Chicago Cubs and he was responsible for scouting and signing Lou Brock. In 1962 he became the first black coach in Major League history when he suited up for the Cubs. Years later O'Neil scouted with the Kansas City Royals and in 1998 he was named "Midwest Scout of the Year."

I had the great honor of meeting Buck O'Neil in person at the Negro League museum in Kansas City where he was the honorary chairman of the board. My eight-year-old son and I watched a ballgame later that day at Satchel Paige Stadium with Buck and he was everything that is said about him and more! He was truly a wonderful ambassador for baseball and the Negro Leagues and, because of his playing, managing, coaching in the Majors, working as a scout, and promoting the game, he should get serious consideration for enshrinement into the Hall of Fame.

He barely missed being inducted into the Hall of Fame in 2006, but in his usual classy manner Buck looked at the bright side. According to the Kansas City Star, O'Neil reasoned: "God's been good to me. They didn't think Buck was good enough to be in the Hall of Fame. That's the way they thought about it and that's the way it is, so we're going to live with that. Now, if I'm a Hall of Famer for you, that's all right with me. Just keep loving old Buck. Don't weep for Buck. No, man, be happy, be thankful!"

In 2006, O'Neil, 94 years and eight months old, signed a contract with the Kansas City T-Bones minor league team of the Northern League and drew a walk, making him the oldest player in professional baseball history to make a plate appearance in a game. His old manager, Double Duty Radcliffe, was slightly older (96) when he "pitched" for the Schaumburg Flyers, becoming the oldest pro player ever.

O'Neil died on October 6th of 2006, and on December 7th O'Neil was posthumously awarded the Presidential Medal of Freedom by President George W. Bush, joining athletes such as Jesse Owens and Jackie Robinson in receiving the United States' highest civilian honor.