"Duty should be in the Hall of Fame.
That's right. Now he does a lot of talking,
but anybody you talk to will tell you he talked
a lot but he was a good ballplayer, and
you can't take that away from a person.
A good catcher, a good pitcher, and a good infielder.
Hey, I know he was in his late 50s and
he would get back there and he'd tell you
'Go ahead and steal if you think you can make it,'
and he would gun you out."
--Slick Surratt, outfielder, Kansas City Monarchs 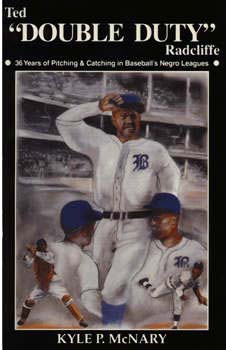 Click below to buy book! Sports Ilustrated called it "Amazing!" 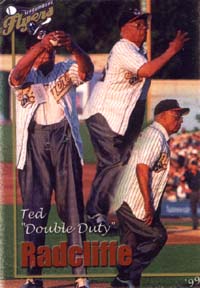 Duty with Tyra Banks and Jay Mohr on the set of
"The Jimmy Kimmel Show" in 2003.

Since my 15 years of Negro League research has largely focused on the career of Double Duty, I haven't honored him with a turn as Negro Leaguer of the Month--he's my favorite Negro Leaguer every month. But, for those of you who have never read my book, the biograpy of Double Duty, or have seen the PBS special I helped with, I want to take this time and space to tell you why Double Duty has intrigued me so for more than a decade.

Though he has suffered various illnesses that come with living more than a century, Duty still has a zest for life that few can match. When I first met Duty in 1992, when he was 90, I could hardly keep up with him. It's been an absolute honor to call him a friend, not only for the ballplayer he was, but for the person he is.

Duty was born in '02 in Mobile, Alabama and grew up playing ball with Satchel Paige, Bobbie Robinson, Cito Gaston 's dad, Hank Aaron's dad and Billy Williams' dad. At the time, Alabama might have been the greatest producer of baseball talent in the union, at least in the Negro Leagues.

In 1919, Duty moved to Chicago and was discovered by the Illinois Giants and he hit the road. He would play baseball "everywhere a black man could play" for the next 36 years.

I don't want to get into a boring recitation of stats, but there are a handful that you might appreciate.

To understand Double Duty, you need only remember this: he was the best, and he's not shy about telling you!

"How many men you know could pitch and catch?" he will often say. The answer, of course, is not many!

During the ten-year-span of 1928-1937, I could argue that Double Duty was, along with Martin Dihigo, the most valuable player in black baseball.

Most of these season, Duty won 20 games, while averaging over .300 with power.

In 1934, with the Jamestown Red Sox and Chicago American Giants, Duty had one of the finest years anyone's ever had. He won 18 games, lost 4 and walked only 17 batters all season. At bat, Duty batted .362 and hit some of the longest homers ever seen in North Dakota! After the season, Duty managed a North Dakota semipro team that took on the Jimmie Foxx All-Stars (featuring Hall of Famers Foxx, Heinie Manush and Ted Lyons, along with All-Stars Pinkie Higgins and Doc Cramer, and 20-game winners Rube Walberg and Earl Whitehill.)

The North Dakota stars beat the Major Leaguers in Valley City, Jamestown and Bismarck. In those games, Duty batted .556 and threw a complete game win in Bismarck, not allowing a run until the 9th inning.

I've interviewed more than 50 Negro Leaguers in the past 15 years, and the majority think that Double Duty belongs in the Hall of Fame ("He could do everything but run!" said one player).

The only knock against Duty was that he was able, with his personality, to promote himself as good as Muhammed Ali or Deion Sanders. Some players, frankly, were jealous. The squeeky wheel gets the grease, and Duty's been squeeking for more than a hundred years.