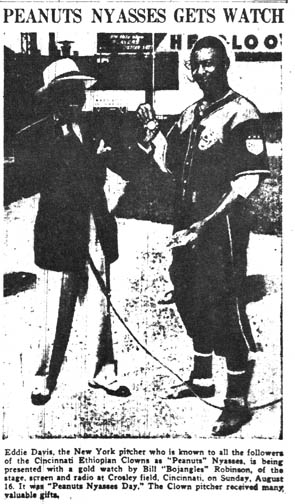 “Peanuts was the best pitcher I ever saw.
His knuckler was unreal.”
--- teammate Ray Neil.

How good does a man have to be to be a better pitcher, and better entertainer than Satchel Paige?  Very good!  And, for a six or seven year period, Peanuts Davis was!

Davis was born in New Orleans, and spent many of his formative years in Jackson, Mississippi.  It was in Jackson that Davis started playing semipro ball with the Gobbers Grade-8 Feed Company team, and where he earned extra money selling peanuts at the Jackson minor league park (hence his nickname “Peanuts).

In 1938, Davis was signed by the Miami Ethiopian Clowns, and was given the “African” name of Nyassas.  Davis would stay with the Clowns as they moved from Miami to Cincinnati to Indianapolis, and was one of the greatest showmen in the Negro Leagues for most of those seasons.

In the championship game, versus the Bona Allens, the Clowns trailed 7-2 in the ninth, but scored seven runs to win 9-7!

By 1942, Davis might have been the best pitcher in baseball (with all due respect to Hilton Smith and Leon Day), as he combined clowning with a fastball and four different knuckleballs to roll up 201 wins out of 206 decisions in a six year stretch, including an incredible record against Satchel Paige.

Davis was so good during this period that he could afford to “clown” while beating teams such as the Monarchs, Chicago American Giants, and Brooklyn Bushwicks.

Davis’ clowning usually consisted of wearing face paint, constant chatter, good-natured teasing of his opponents, and intentionally walking opponents so that he could bear down and work out of trouble with his incredible “butterfly ball”—an incredibly slow knuckleball with tons of movement.

In 1946, Davis had a 20-inning duel with Gentry Jessup of the Chicago American Giants that ended in a 3-3 tie, and it’s estimated that he threw well over 250 pitches that game!

Besides “owning” Paige and many other pitchers in head-to-head matchups, Davis also seemed to have the number of Josh Gibson, the top hitter in the Negro Leagues.  Gibson, however, finally figured out how to hit Davis’ knuckler, and homered three times off it in a single game.

Besides being an incredible pitcher, Davis excelled at all phases of the game.  He could hit, field his position, and run.  Davis was such a great athlete that he played professional basketball in the off-season to stay in shape.

In the 1940s, the Clowns played more games, in more towns, than any other team on the road, and drew some of the largest crowns due to their style of play, and special attractions.  From ’46-’50, Olympic track star Jesse Owens traveled with the Clowns and put on sprinting exhibitions, racing any player who dared (he never lost!), and even a horse!

The Clowns of the 1940s had one of the best pitching staffs in baseball, boasting Peanuts and Roosevelt Davis, Pullman Porter, David Barnhill, Fireball Jim Cohen, Preacher Henry, and Henry McHenry.

As it turned out, the only thing Peanuts Davis couldn’t do was stay in game shape, and his many years of partying and carrying on finally caught up with him.  In 1951, Davis traveled to Canada to play for the Indian Head Rockets in the Western Canada League.  One of his team’s opponents during the year was the Saskatoon 55s, starring first baseman Gordie Howe—yes, that Gordie Howe!  On the year, Davis was 3-1 on the mound, and batted .333.

After the ’51 season Davis retired from baseball, and he died not long after, reportedly from a social disease.